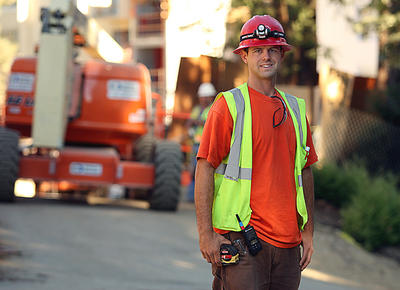 SANTA CRUZ — At a time when college costs are escalating, student debt is burdensome and fewer good-paying jobs are open to young people with a baccalaureate degree, Daniel Gilbertson stands out.

A Santa Cruz native, Gilbertson says he didn’t have the chance to go to college after high school. He enjoyed being outside so he worked for his father-in-law in construction.

“I make more than all of my friends, and some are college grads,” he said. “And I have zero school debt.”

His secret to success: a five-year apprenticeship through the International Brotherhood of Electrical Workers Local 234.

By Kollin Kosmicki - Photograph by Nick Lovejoy - San Juan leaders felt an electrical charge of excitement Friday. That's because they dedicated the county's first electric charging station for vehicles a day after they activated the machine on Muckelemi Street at…

Local electricians plug into the sun

Solar installation will offset tons of emissions, but local electricians take a hit